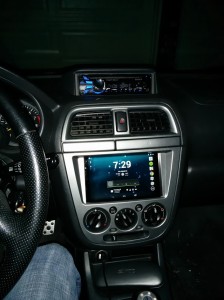 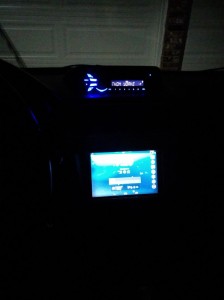 My car is a Subaru, a 2002 WRX which I bought in 2009. The factory equipped this car with a 6-CD-changing, cassette-playing, double-DIN head unit which was still installed when I bought it, and remained in the car until February 2014, when I finally decided it was time to upgrade to something more…21st century. To make a long story short, and spare you a bunch of rambling, I decided that I wanted to integrate a Nexus 7 tablet into my car rather than buy some fancy double-DIN head unit with an LCD and a DVD player which would cost $1,000 and which wouldn’t really make me happy. The Nexus 7 (2013 version) is an Android tablet manufactured by Asus with a 7″ screen (151 x 94 mm). The screen fits pretty much perfectly within the window of a double-DIN head unit. As of this writing, the version with 16 GB storage (vs 32 GB) with wifi-only (no 3G/LTE) is currently available on Amazon.com for about $200. It’s an ideal candidate for integration into the dash of a car, if you’re interested in Android over iOS or Windows and aren’t looking to spend a thousand bucks.

Lead-up to the project

Before starting on this project, I did a considerable amount of research. I’m not the first guy who’s tried to mount a tablet in his car. There are several ways that people have approached this problem, but in general, there seem to be two common approaches. The first approach (example) is to fully integrate the tablet into the car’s dash. The back of the tablet is often removed and the power and volume buttons are wired to other buttons that exist in the car, usually remnants from the stock stereo system. The tablet is sometimes connected via USB to a powered USB OTG hub, which in turn is connected to a digital-to-analog converter (to feed to the stereo amplifier) plus other gadgets. Benefits:

The second approach is to mount the N7 to the dash using magnets or some other mechanical means and interface it with the car totally wirelessly (example). A bluetooth system such as a Novero TheTrulyOne is installed which interfaces with the stock head unit. An inductive charger is mounted behind the N7. The USB and headphone ports are not used. Benefits:

In the end, I decided to follow a path more closely-aligned with the first approach, but which also shares some of the benefits of the second approach.

With the plan established, I set to work building a bill of materials and sketching up plans on how to integrate everything into a coherent, professional end product. Along the way, I documented everything, which I will attempt to share here on this blog.

I have documented the various aspects of this project in a series of posts.